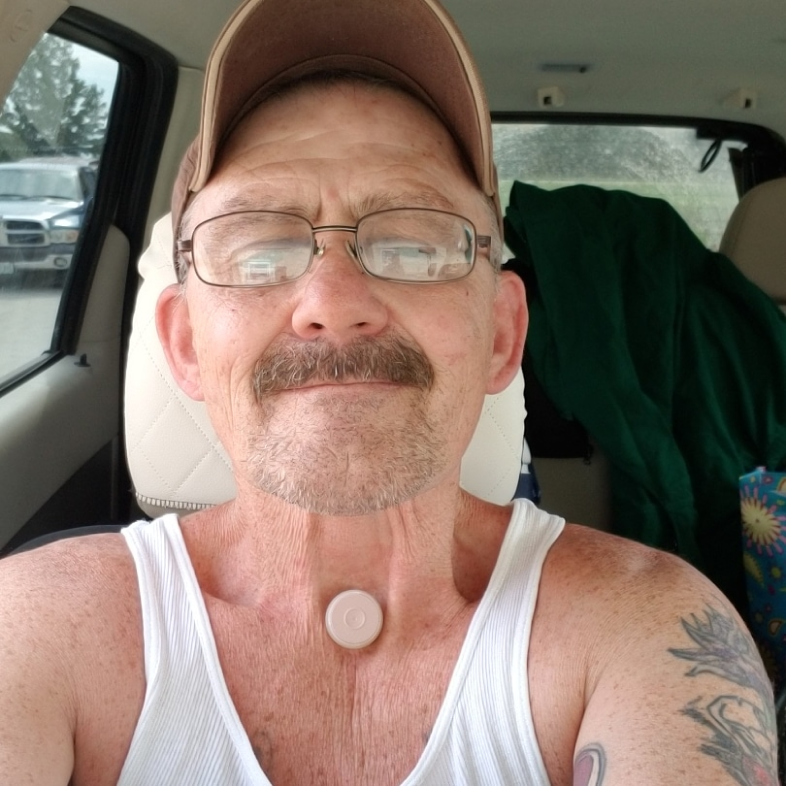 “I worry every day if I will be told that I can’t get medical attention over that bill.”

Larry is a 57-year-old former carpenter from Lebanon, MO who was diagnosed with throat cancer in 2013. At the time, he had insurance through his job, but was forced to quit upon his diagnosis, because he couldn’t be around dust, fumes, or smoke. He applied for disability. “It’s a big life change to be working one day then all of a sudden to never be able to work again,” he says. His wife was on his insurance, and lost her care too.

At the time, his disability checks were $900 per month, which, combined with his wife’s income at KFC, qualified him for a discount on an ACA marketplace plan that cost $147 per month. The Springfield Cancer Institute helped pay for his radiation and surgery that removed all of the lymph nodes in his neck and replaced his voice box with a prosthesis called a tracheostomy (trach) tube. Maintenance treatment includes visiting a speech therapist monthly to replace his trach tube, which alone costs $600 per month, a procedure every three months to widen his throat so he can eat, and visits to an oncologist every six months to monitor the progression of his cancer.

When Medicare kicked in, he was no longer eligible for the Marketplace plan, so he applied for Medicaid to make up for the benefits Medicare lacked. His family income made it so that he exceeded Missouri’s notoriously low Medicaid income eligibility requirements, so he had to use a Medicaid spend-down, which was set at $700 per month. This meant he had to spend $700 on medical expenses per month before his coverage could go into effect.

When he and his wife split up, his disability income increased to $13,000 per year or $1,083 per month, and his spend-down decreased to $247 per month. But by then, he had racked up over $25,000 in medical debt. Now, after paying his rent and medical bills, he has $20 left over, which doesn’t nearly pay for the spend-down. But he goes to the doctor anyway because he has to. “I don’t have a choice. I have to go. I would just die if I didn’t go.”

“You can do everything right and still struggle.” Like many people, he has chosen to go to counseling for symptoms of depression because of the huge toll cancer treatment has had on him, both financially and psychologically.

And still, Larry has done everything he can to advocate for himself. He has contacted his representatives, and was able to contact the Medicaid office, which got in touch with Mercy billing to reduce some of his undue medical debt. Yet, his costs keep accruing because he is trapped between his meager social security checks and his high spend-down, on top of long-term medical debt. “It wasn’t until I was got cancer that I found out about MO Health Net,” he says, remarking on the inaccessibility and lack of education around the program.

“I wish lawmakers could live one day in the shoes of someone who is going through cancer and the hardships that they go through and see how hard it is to look at the bills. I never thought I would owe over $60,000 in medical bills just because I lost my voice box over throat cancer. I have to go in every month to get my lary tube changed out just so I can drink coffee and water. I worry every day if I will be told that I can’t get medical attention over that bill. I don’t make but what I get off of disability. And a little over $13,000 is not much to live on. Full Medicaid coverage would help me feel better about going to see my doctors knowing that it is there to help pay for it.”