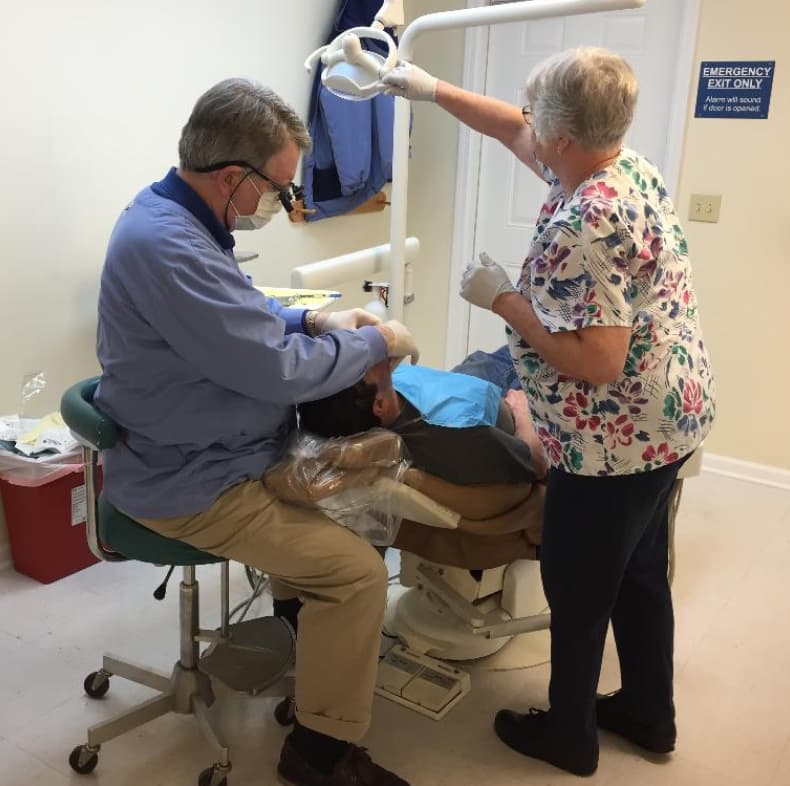 “All the years when our kids were growing up, we could not afford insurance...it was a heavy cloud that hung over us in fear that something serious would happen.”

Maxine and Ken Horgan are retired volunteers at the Good Samaritan Care Clinic in Mountain View. She worked as a dental assistant before marrying and starting a family with Ken. “All the years when our kids were growing up, we could not afford insurance and even though we were very lucky with no major illnesses, it was a heavy cloud that hung over us in fear that something serious would happen.” About 10 years ago, the administrator of the Good Samaritan Care Clinic, Sheri Noble, put out an ad in the paper asking for volunteers to work at their dental clinic. At first, Maxine was nervous about going back into the dental field, “I had not worked for 30 years, and Sheri said, ‘Oh no, we can use you!’”

The Good Samaritan Care Clinic was founded in 2003 by Dr. Jon Roberts. Roberts started the volunteer clinic after a patient asked why he would go to other places in the world to provide care when there were people who couldn’t afford health care in his own community. He started organizing volunteers and community members to form the clinic that now provides care to people across 28 counties in Missouri and Arkansas. With the passage of the ACA in 2010, they saw a slight decrease in patients, but the need for health care was still there due to the coverage gap left by the Missouri Legislature not expanding Medicaid.

In their work at the clinic, Maxine and Ken see firsthand the deep need for affordable health care. Before COVID-19, Missourians traveled on Monday nights to wait in line to receive health care at Good Samaritan Care’s medical and dental clinic for adults. Patients came from all around: Nixa, Poplar Bluff, Salem, Rolla, and even Arkansas. Entering the dental clinic was an eye-opening experience for Maxine. “It was an awakening experience for me because I had not seen people’s teeth that bad.” In their clinic, all they did was extractions as many folks’ teeth could not be saved due to decay. “Some have been sent to the ER right away because their symptoms were so severe.” Maxine recalls that many folks they saw were older adults who didn’t qualify for Medicaid but weren’t old enough to qualify for Medicare. “The clinic is their only lifeline to see a doctor. The people that come are so thankful on Mondays.”

One story that stood out to Maxine was when a young man came to the medical clinic with a horrible ingrown toenail. His toe had swollen to nearly twice it’s normal size. They wondered how this patent was able to walk. “It goes to show you what it can look like if you don’t get things looked at. Something like that would cost a lot at a doctor's office. I know what it’s like to not go to a doctor, and I don’t begrudge anyone who can’t.”

Maxine and Ken have neighbors who, although employed, have to come to the clinic because they cannot afford health insurance. “They need to work, want to work, and will work if they have a job. But without health insurance, it can snowball. It can get you so far in debt.”

The Horgans gathered signatures for Medicaid Expansion. They testified at meetings with legislators both locally and in Jefferson City asking them to expand Medicaid and ensure all who need care receive care. When it comes to Medicaid Expansion, “There is a need, and the clinic is meeting it. But there are more patients that come to the clinic than they can provide for. It [Medicaid expansion] just needs to be done.”